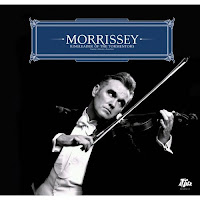 For several years now Morrissey's music has straddled the divide between comedy and tragedy. His songs tells us about girlfriends in comas and hairdressers on fire, implore us to hang a D.J., and speak of bludgeoning people in their beds. But somehow they are never completely depressing. Even the gloomiest Morrissey song is good for some comfort, or a laugh.

That's good because lately Moz is concerned with mortality. Nearly every song on his new album mentions death in one form or another. But, dashing ghoul that he is, Morrissey knows exactly how to avoid bumming us out. Sometimes it's a line, sometimes it's a note, but he always rescues himself from pity, self or other.

You Have Killed Me is a catchy mash note to Rome, with a flair for the dramatic: "Yes, I walk around - somehow / But you have killed me." I'll Never Be Anybody's Hero Now could be a dirge, but the money line "My one true love is under the ground" is delivered with ringing major guitar chords, as though this is something celebratory.

In other songs he bluntly juxtaposes love and disaffection. Life Is A Pigsty seems like a title to cool any cynic's heart but it's actually a pulsing love song ("I'm falling in love again," Moz says repeatedly as the song ends). To Me You Are A Work Of Art is as balladic as Morrissey gets, but he still has to frame his admiration thusly: "I see the world, it makes me puke / But then I look at you..." Later, he claims not to have a heart, but we know better.

The Youngest Was The Most Loved and The Father Who Must Be Killed are both theatre-worthy concepts. The former is told from the perspective of a family whose youngest member becomes a murderer. The latter weaves a grisly tale both modern and Shakespearean (not that the two are necessarily mutually exclusive). Lyrically, it's a narrative that an old blues man or grizzled country singer alike could appreciate. Musically it's as cheery as going home early from work on a beautiful spring day.

A couple of the album's strongest songs - I Will See You In Far Off Places and In The Future When All's Well - even come off the slightest bit optimistic. The first has the funniest line of the album: "If your God bestows protection upon you / and if the U.S.A. doesn't bomb you / I will see you in far off places." The second remains as hopeful as its title, at least until the end when Moz adds - a bit superfluously - that "the future is ended by a long sleep."

On The Streets I Ran best sums up the record's themes and modus operandi. Uncharacteristically introspective, Moz confronts his legacy and past ("turned sickness into popular song") while still hoping for more life. In fact, he begs for it: "Dear God, take him, take them, take anyone / The stillborn / The newborn / The infirmed / Take anyone / Take people from Pittsburgh, Pennsylvania / Just spare me!" Who else can make you laugh while pleading for immortality?

And that's the beauty of Morrissey's approach. He's not really a tormentor at all, he's a comfortor. He creates songs that are about the things that make you feel bad, but don't actually make you feel bad when you listen. To me, that's the work of an artist.

Grade: B+
Fave Song: To Me You Are A Work Of Art

sara said…
Dear friend,
I saw your weblog and it was
interesting for me. I hope successful for you.
I would like to introduce an address that you will find very interesting and beautiful templates for your weblog that offer you.
Best Weblog Templates Pack
3:01 PM