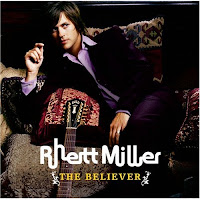 Though Brion shows up on a handful of tracks, he once again comes up looking worse for the wear. For one, George Drakoulias has done a bang up job of producing. The sound is richer and fuller than on Miller's first album. And the background vocals, provided here by ex-Jayhawk Gary Louris, easily best anything Brion laid down on The Instigator. Finally, Miller seems to give the knife just one more twist by covering I Believe She's Lying, a song Brion co-wrote with Aimee Mann and which appears on his 2000 solo album. I know getting covered seems like a compliment, but Miller's version is approximately 15 times better than the original, more engrossing and better sung.

Maybe I'm not being completely fair to Brion. Miller's songwriting has obviously gotten stronger. That's evident from the very first track, My Valentine, which is instantly better than anything on Miller's first album. The song is full of joyous discontent: "Won't you make up your my-my-my valentine / you say you love me but you treat me unkind." There's a great bridge, wonderful guitar solo, and easy delivery.

From there we get the appreciative and catchy Help Me, Suzanne. Do you ever have those times where a song is not only in your head, but you also have this overwhelming need to keep singing it out loud? That was me with this song last Friday.

Two other songs confirm that Miller has made the songwriting leap. On The Instigator the obvious weak spots came whenever Miller tried to slow things down. He's fixed that problem. Fireflies is a transcendant, woozy, bar-closing country duet with Rachel Yamagata. I guarantee you Ryan Adams is wishing he wrote this one. Yamagata sounds smoky and worn out, and the song's structure is just perfect, with an emotional bridge and a cylical closing.

Similarly, the title track slows it down without putting us to sleep. After Ben Folds' Late, this is the second great tribute to Elliot Smith. Like Folds' song, The Believer manages to be affecting without being sentimental: "You are here and after referred to / as someone who gave it your best / gave it a shot / gave it up / left a cruel world to us." Unlike Folds' song, the sentiment is universal enough to apply to anyone who has lost someone important. The coda gets me the most, envisioning the freedom death brought to the unhappy Smith: "You won't get nervous / you won't come down / you won't feel helpless / you won't be around anymore." Honestly, Smith's music never meant all that much to me, but he was obviously influential to a lot of talented people.

Other songs make their point quickly and get out of the way. Brand New Way has a great melody, but lacks substance. Delicate is anything but. Singular Girl is destined to be used in a cell phone commercial, even with the head-scratching line, "talking to you girl / is like long division." I'm With Her is the rare love song that puts it right on the table: "We will be wed and we will procreate." And Question is a adequately pretty closer; Miller says "I've got a question for you," but we never find out what it is.

I'll admit, often there's no rhyme or reason as to why an album speaks to me. Sometimes it's just a matter of right-place-right-time. But I'd like to think that when an artist has bested himself it's obvious. If only Jon Brion didn't have to suffer in the process.

Grade: A-
Fave Song: The Believer

Anonymous said…
I find it hard to fathom that you don't know what question the narrator of "Question" is popping. Listen to the lyrics again.
9:39 AM

Paul V. Allen said…
I have a good idea what the question is; it's one that is usually popped. But it's fun to leave it up to individual interpretation, and the lyrics are vague enough to allow that.
3:35 PM

Anonymous said…
You are dead wrong. The Instigator is by far the better record. Not that The Believer is bad...it has some really great moments. You need to go back and really listen.... Use some headphones next time. Jon Brion really knows how to make music. His version of "I Believe She's Lying" is better too. Rhett's version drags. Check your ears man!
11:18 PM