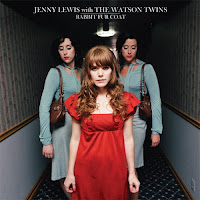 Attention female singers! Do you desire critical acclaim and a rabid fan base comprised almost exclusively of music geeks? If so, make a country soul record, and watch your dreams come true before your very eyes!

Jenny Lewis has been with us for awhile - first as a child actor, then as singer for Rilo Kiley - but she made the scene in a big way in 2004, both with Rilo Kiley's third album More Adventurous and her participation in Ben Gibbard's Postal Service project. She's sexy in a cute way, she writes her own songs, and she's a little more than likely to break your heart. She's the darling of indie boys and girls, and her debut solo album will likely cement that status.

It begins with a bit of strummed guitar and then an a capella burst of harmony, courtesy of the bill-sharing Watson Twins. The introductory piece is called Run Devil Run, and it's the first of many refrences to spirituality. The Big Guns mentions the afterlife, begs for mercy and asks "what have we done?". Rise Up With Fists!! gives us the chorus: "There but for the grace of God go I." In The Charging Sky Lewis says she's "taking up praying on Sunday nights" and wonders "but what if God's not there?" Born Secular includes multiple shout-outs to the man upstairs. Is Ms. Lewis reassessing her life?

Maybe, but it's also possible she feels guilty about something. The final song is called It Wasn't Me, and it's a sort of kin to Billy Joel's An Innocent Man. That is to say, they are both songs where the narrator sounds more interested in covincing themselves than anyone else.

Lewis also uses the record to tackle other issues. She revisits the quagmire of a fucked-up relationship in You Are What You Love. Like Portions For Foxes before it, we get some tart couplets about not being able to extricate yourself from a hairy situation, such as "I'm in love with illusion, so saw me in half / I'm in love with the trick, so pull another rabbit out your hat."

The other issue is her mother, who is the subject of the twisty title song. I'll let you interpret for yourself, but I'll just say I wouldn't want this song written about me, for a multitude of reasons. And even as personal and brutal as the song is, you also get a sense of understanding from Lewis, as though she dislikes in her mother the same things she dislikes in herself. Happy backs that up, when she sings "my mother never warned me about my own destructive tendencies." I guess that means the apple didn't fall far from the tree.

As for the sound of the songs, it's catchy and soulful, with a twangy aftertaste. The sticker on the front of the packaging compares the record to Dusty Springfield and Loretta Lynn. I've also heard Lucinda Williams as a reference point, but Lewis' songs are more catchy and less gritty than that, at least for the most part (Happy is one of the least happy songs I've ever heard). And because I am such a fan of harmony, I want to mention it one more time. It's just lovely. In fact, the "ahhh-ahhh" coda of Born Secular could go on about 5 minutes longer than it does and I wouldn't really mind.

The bottom line about this album is this: Jenny Lewis better have a disguise ready if she plans on making any visits to independant record stores. It will be for her own good.

Allen Lulu said…
Its a nice world where a 70 something country and western artist can put out one of the most listenable albums I've ever heard and within 21 months a 20 something indie/alt girl can put out a fresh version of, what basically amounts, to the same kind of album. Replete with the bleakness of a Silverlake youth.
Oh, did I mention that I loathe country? But between Van lear Rose, Rabbit Fur Coat and Georgia Hard, I may be converting.
12:47 AM