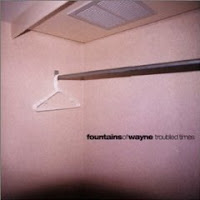 I consider this the final installment of a sporadic episodic sequence, starting back in December with my thoughts on John Mayer's Home Life and continuing in March with the Robbers On High Street's The Price & Style. I never planned to use these song essays in an autobiographical manner, but essays and songs can be tricky like that.

When writing about Home Life, I wrote about how the song spoke to me exactly. The Price & Style found me interpreting non-specific lyrics to fit life experience. This time I want to ponder how a song's lyrics can suddenly become relevant. Take Fountains Of Wayne's Troubled Times, from their second album, Utopia Parkway. It's a lush, harmony-driven ballad that has always stood out on that album as a shoulda-been hit.

The song has a story, but unlike FOW's other work, it's not so easy to figure out. It can be impressionistic at times. The narrator regrets that things have gone sour with a certain someone in his life, someone that was or could have become very special to him. We don't know what kept them apart. Maybe he treated her wrong, maybe she didn't give him enough of a chance. But suddenly our hero has hope again, and the chorus repeatedly claims: "Maybe one day soon / it'll all come out / how we dream about each other sometimes."

I always liked the song, but not until recently did I identify with it. Let's just say the idea of two people looking for romantic redemption is very relatable to me right now. Now lines drop in and speak to me. Things like, "all you imagined / fit so well into your plans" and "start with a weak foundation / it will lead to ruin."

Where the first two installments of this trilogy ended on notes of regret, this one is fittingly more upbeat.

Album: Utopia Parkway (1999)
Fave Moment: The background vocals at the end of the bridge.

Anonymous said…
This comment has been removed by a blog administrator.
7:22 AM

Anonymous said…
This comment has been removed by a blog administrator.
7:06 AM