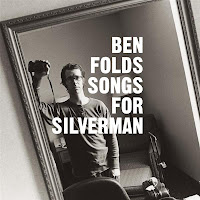 hat would all the Billy Joel fans do without Ben Folds? Aside from wearing out our copies of 52nd Street and The Stranger, we'd be completely bereft of piano-based pop storytelling.

Songs For Silverman is the official follow-up to 2001's Rockin' The Suburbs. In the 4 year interim Folds has kept busy with live album, a series of EPs, and collaborations (William Shatner, The Bens). Those projects were mildly satisfying, but I'm guessing this is what most of us were waiting for.

Folds' musical act has always been one of balancing the silly and the sublime. Even in the Ben Folds Five days straightforward ballads coexisted with irony-and-expletive-laden outbursts. I've always been a fan of the former more than the latter, and thankfully, SFS is ballad-heavy. You could call it maturity, or you could just call it keeping the tone consistent. Without exception, the 11 songs are built with the trademark Folds sound, lots of percussive piano, great melodies, and generous harmonies.

Bastard is a questionable choice for opener. It's not the immediate knockout punch you expect from a first song, and it's not easy to figure out. By turns the song appears to speak to an old man who's past his prime, and a young man who will become that old man some day. Both are very clever, but have trouble admitting fault. Best line: "They get nostalgic about the last ten years / Before the last ten years have passed." I Love the '00s anyone?

You To Thank is the first of many songs (see also: Landed, Trusted, Give Judy My Notice, and Time) that reference failed / failing relationships. I read somewhere that Folds has been married three or four times, so we know he has a lot of material to work from. This song is about a doomed wedding, and Folds shows off a startling ability to say a lot with very few lines: "As they danced and drank / We jumped off the deep end."

Jesusland is an ode to Bush's second term America. Fittingly, the tone is not angry. Instead, it's sad and resigned. I know that's how a lot of us have felt since last November. When Folds sings, "You hang your head and pray for Jesusland," it makes me think about how Bush and his cronies have even co-opted religion.

Landed, the first single, is an instant classic. It has a piano tone that instantly brings to mind Elton John in his '70s heyday.

I keep thinking of Gracie as a companion piece to Rockin' The Suburbs' Still Fighting It. That song was from Folds to his son. This one is about his daughter. As I've written before, creating songs about children is generally a bad idea. This one manages to walk the razor thin line between sweet and too sweet, and just barely manages not to fall into the river of chocolate.

Give Judy My Notice first appeared on the Speed Graphic EP. I liked it okay there, but it's my favorite song here. Why? Who'd have thought that some added background vocals and a pedal steel could improve a song so dramatically?! This song is a perfect kiss-off to a relationship. The best line: "Tears fall / But that don't mean nothing at all / It's just 'cause I said it first / Yeah, that's why it hurts ya."

Late is a mostly unsentimental, yet completely affecting, tribute to the late Elliot Smith. Instead of the usual words we say when someone dies too early, Folds mirrors his experience as a touring musician with Smith's. He uses the song to speak directly to Smith: "The songs you wrote / Got me through a lot / Just wanna tell you that." When I saw Folds perform at First Avenue a couple of years ago he covered a Smith song, so this just makes complete sense to me.

Sentimental Guy could be heard as another paean to an old romance, but I imagine that its about Folds' father. It also seems to go well with Bastard. Musically it sounds like Randy Newman jamming with the Beach Boys.

Time marks the serious musical debut of Al Yankovic (sans the "Weird"). He contributes very effective background vocals to another regretful hymn. What are the odds on Folds' producing Yankovic's first grownup album? If it worked for William Shatner...

The album ends with Prison Food, which is quite lyrically mysterious and quite musically Vince Guaraldi-esque.

Overall, this is a stellar effort. Rarely would I care enough to write about every single song, but this feels like an album that will be special to me for a long time. Maybe not as special as An Innocent Man, but that would be a near-impossible feat. Let's just hope Folds never decides to give up pop music for classical composing.

Grade: A
Fave Song: Give Judy My Notice