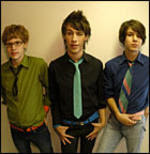 One of the most exciting parts of living in a larger (plus size?) city is the opportunity to participate in the local music scene. I often wish I'd been here in Minneapolis during the mid-eighties heyday of Prince and The Replacements. Though the city's music scene has never truly lost respectablitiy, it'd still be nice to be a peripherial part of such national admiration. In my opinon, one of the prime candidates to bring that back to us is Melodious Owl.

Here's the bio: The band is comprised of three members. One plays keys and saxophone. One plays guitar. One synthesizes and sings. They're all students at inner ring suburban Hopkins High School. Yes, that's right.

I saw them play about a month ago, opening for Olypmic Hopefuls, and I've gotta say, I've never before felt such a palpable excitement about an unknown band. Part of it, granted, was disbelief. These guys are in high school? How can their sound be so developed, their lead singer so assured? But novelty only gets one so far; these guys have something bigger than that, and the 7 songs on this recently-released EP are proof.

One of the reasons I think Melodious Owl has such a chance at stardom is that their music is danceable new wave, which just happens to be the current "it" sound. This may lead one to think that they are simply jumping on a bandwagon. But consider this: 1) They are not a direct clone of any of the current proponents, nor any true new wave band from the late '70s or early '80s, and 2) Lead singer Wes Statler's father is a filmmaker who worked on many of Devo's videos.

Songs like Dance Fever Revisited, Stripe, and Touch Me teem with hooks and interesting moments. Statler's vocals are reminiscent of The Cure's Robert Smith, if Robert Smith was more cocky and less mopey.

Of course, the band has some growing to do. They'll have to prove they can pull off a couple of slow numbers. And they lyrics aren't poetry. Even so, Statler rattles off bon mots like "Are you ready to do this / Are you ready to do more than kiss?" and "I'll wear you out / On the dance floor" and it's hard to resist. The band even flirts with the same sexual ambiguity that Franz Ferdinand does; but the boy they admire is not Michael, it's Andrew.

Word is that the band are nearly finished with their debut album, and just in time for graduation!. I can only hope the rest of the world catches on to their pomp and circumstance.

Anonymous said…
Another person to fall for these no talent assclowns.
Seriously, there isn't much new wave about them other than the synth. It's prepostorous to even call them new wave. To my recollection, Neu! were never considered a new wave band because they had a synth, they were synth pop. What Melodious Owl are is part of a school of bands parading around as new wave mixed with post-punk known as electroclash.
And you're surprised by high schools being fully developed song writers? Go listen to Redd Kross, they were even further developed and half the band was in Jr. High. Seriously, some of you people are so easily amused, like watch a dog dance on its hind legs. These guys don't have any real talent, their sound is so "developed" because they copped it from the Rapture right down to the awful, exaggerated vocals. Don't give people praise for being hacks, that's how teen movies and chick flicks came about. If you think they're unique, obviously you don't read Pitchfork.
Melodious Owl have absolutely no chance at stardom because

A) There are hundreds of bands way better than them in the same genre alone.

B) Electroclash is dying and Melodious Owl came onto the scene about two years too late to get them any record deal that would rocket them to said stardom.

Minneapolis will never be rocketed back into stardom because what we were doing in the 80's was truly on the cutting edge. Husker Du and the Replacements inspired and are responsible for thousands of bands, not the least of which are Nirvana and the Pixies. Can you see that happening with a band like Melodious Owl? No, because it's been done, and it's been done better.
Besides, we all know the highlight of that show last month was Mallwolf.
2:54 AM

Paul V. Allen said…
You have some good points there. I agree that if M.O. are going to have any chance to be signed it's gotta happen now, because the trend isn't going to last.

I also agree that they aren't anywhere as innovative as The 'Mats or Prince or Husker Du.

But, wow, where is the anger coming from? Music is meant to be fun and entertaining! If you don't like a band there's no need to get upset about other people enjoying them.
10:44 AM

Anonymous said…
Had to post, because MO is far from talentless. I've seen them twice, bought their EP, and I gotta say, me and my three girlfriends at the show were AMAZED by the lead singer. He's f'ing AWESOME! Seriously. He's like the bastard child of the lead singer of Electric Six and Mick Jagger. When he started taking off his tie and jacket, we were swooning. And then we remembered he's in high school.

Their music is sooo good, it's danceable, it's full of catchy hooks, and yeah, they have talent. I think and hope that they make it big, or at least something on the scale of Mark Mallman or Rob Skoro.

They rock, and whoever posted that moronic diss of them, is just that...a moron.