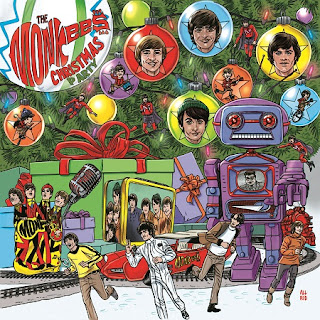 Continuing the Monkees renaissance that began with 2016's Good Times! is the band's first ever Christmas album.

Christmas Party follows the same blueprint as Good Times! It was produced by Fountains of Wayne's Adam Schlesinger. It also features prominent songwriters contributing new tunes. And all three living Monkees participated, with Davy Jones showing up via archival material.

Good Times! was an unlikely confluence of my tastes (Monkees + Fountains of Wayne + XTC + Weezer), and this one is somehow even moreso. In addition to the return of those previous elements, Christmas Party has Peter Buck from R.E.M., a tune with lyrics by one of my favorite writers (Michael Chabon), backup vocals by singer/songwriter David Mead, and cover art by one of my favorite comic book artists (Michael Allred). Who at Rhino Records is inside my head?

As with my other Monkees reviews, I'll break things into categories.

New Songs
All four of these tunes were written new for this record, and feature Mickey on lead vocals.

The opening tune, Andy Partridge's"Unwrap You at Christmas," is catchy but creepy. The song's narrator is telling a woman, in essence, that all he wants for Christmas is her. That's all fine and good, but the repeated line imploring Santa to "please leave her at my door" paired with the sexual innuendo of the title lend a mildly predatory/possessive air. [UPDATE: I've since learned that Andy originally wrote this song on spec for a female singer. This makes the song itself more forgivable, but doesn't explain the Monkees' selection of it; surely Andy had a different Christmas tune that was more appropriate for a male septugenarian to sing].

Also lyrically puzzling is Rivers Cuomo's "What Would Santa Do." The song starts off as a screed against those without Christmas spirit, leading into a chorus wondering how Santa himself would handle these types. But the second verse finds the narrator coming home to find himself cuckolded by the jolly old elf. This makes the second shift into the chorus nonsensical. What would Santa do? He would steal your girl. Maybe none of this really matters, because the song has enough melody for at least three different songs, and Mickey sells it all with conviction.

Adam Schlesinger wrote "House of Broken Gingerbread" with Michael Chabon, and it completes the trilogy of lyrically-odd originals. In this case, at least, the lyrics accomplish what they set out to do, which is tell a tale of Christmas in the wake of divorce. There are two of everything, but nothing is quite right. Chabon's storytelling gift is evident throughout; think about how much is communicated in the lines: "The boyfriend's a dentist, the stepmom is cool / Dad gave me a brother / Mom promised a dog / And one of those French cakes disguised as a log." Schlesinger, of course, keeps it poppy throughout, making one wish for a whole Fountains of Wayne and Chabon album a la Ben Folds and Nick Hornby's wonderful Lonely Avenue.

The final original, Peter Buck and Scott McCaughey's "Christmas Party" feels much more in line with the madcap Monkees spirit. Detailing a wild Christmas fete, and with its references to James Brown, Darlene Love, and Chuck Berry, serves as a tribute to the role pop, soul, and rock music have played in Christmas celebrations.

Classics
"Mele Kalikimaka," Davy Jones's take on the tune popularized by Bing Crosby, was recorded in 1991 for the CD release of Davy's 1977 Christmas record, Christmas Jones. The original vocal, ukelele, and guitar are intact, but Schlesinger and friends added new bass, guitar, and drums. Ditto for "Silver Bells." Both songs are good fits for Davy's peppy showtune persona.

The two reclusive / reluctant Monkees also show up in versions of Christmas classics. Michael Nesmith contributes a tastefully countrypolitan version of "The Christmas Song" and Peter Tork teams up with guitarist James Lee Stanley for a folksy, banjo-driven version of "Angels We Have Heard on High."

New Classics
Instead of relying on just standards, the album ranges out into some lesser-known Christmas songs as well. There's "Jesus Christ," a take on Big Star tune from 1979 that stays true to the ringing, contemplative spirit of the original. And "I Wish It Could Be Christmas Everyday" - originally released by Wizzard (featuring Roy Wood from The Move and ELO) in 1973 - is a perfect fit for Mickey's voice.

Paul McCartney's 1979 "Wonderful Christmastime" is a divisive tune, largely because of its forward-thinking-but-annoying synth line. I've recently discovered that the very best version is by The Shins, but the Monkees version ain't bad either, largely because - like the Shins version - it replaces those synths with an acoustic strum, and focuses on the strong songwriting underneath.

Papa Nez stays on the jazz theme with "Snowfall" a pretty version of the 1941 piece by the Claude Thornhill Orchestra. And Mickey gets to vamp it up on the R & B-flavored "Merry Christmas, Baby," a 1947 tune by Johnny Moore's Three Blazers that has also been covered by Otis Redding, Elvis Presley, and Bruce Springsteen.

Bonus Tracks
The Target version of the CD features two bonus tracks. The first is a 1967 recording of the Spanish traditional about Christ's birth, "Riu Chiu," which was featured in the original Monkees TV show, and finds all four Monkees singing a capella.

"Christmas is My Time of Year" was a one-off reunion single released in 1976 by Micky, Peter, and Davy under the cheeky name We Three Monkees. Arising out of the Dolenz, Jones, Boyce, and Hart project, the jaunty tune finds Mickey and Davy sharing vocals, which is always a treat.


It's hard to say if Christmas Party will become one of those Christmas records I spin every December, the way I do John Denver and the Muppets, the Vince Guaraldi Trio, Bing Crosby, and the Beach Boys, but it's an admirable effort. I do have two complaints: One is that the collaborative spirit that made Good Times! so great is not present here. Schedules and health were reportedly factors, but hearing Mickey and Mike harmonizing, and Peter playing guitar on all the songs was one of the joys of that album. The other problem is the fact that the album did not get a release of vinyl. Not only do I need to keep my run of Monkees vinyl intact, but that glorious Allred cover needs to be appreciated full size. Maybe Santa will bring it next year. (UPDATE: He did! The album is now available on vinyl.)

ajaykr said…
Wonderful blog! Are you looking for amazing, excited Virtual Office Christmas Party Ideas? Not to worry!! We have exciting Ideas for Virtual Christmas Party for you. Our updated virtual Christmas party ideas 2021 are inspired and make your Christmas party excited and memorable. Your employees feel connected and maintain relationships with each other. These virtual employee engagement party events also help in the team-building of remote employees.

Pinky said…
Are you planning to host a Offline Christmas Party Games? Give new dimensions to your creative hosting skills. With our unique Xmas party games that will fit your goals. This is the chance to make your Christmas party a memorable one.