Through the Cracks in the Past

February 03, 2016
And I'm gone
Now I'm older than movies
And I know who's there
When silhouettes fall
And I'm gone
Like I'm dancing on angels
And I'm gone
Through the cracks in the past
Like a dead man walking
-David Bowie, Dead Man Walking

I was surprised by the depth of loss I felt when I learned David Bowie died, and it has taken me some time to unpack why.

What is it that we mourn when a pop culture icon dies? 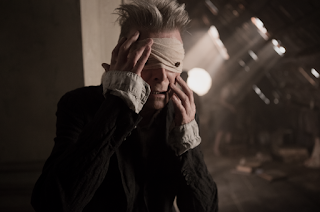 There's the loss of the art they would have made had they gone on living. There's sympathy for the family they left behind, especially if there were young children. There's the manner of the death itself: accident, suicide, cancer. Any combination of these factors is reason enough to mourn, but none quite explain why we feel deep sadness in losing someone we didn't know. I believe that the degree of our mourning is in direct relation to how many fond memories we have of that icon's work. That's why it feels personal.

I also tend to more fully appreciate something when it's clearly over. And lest that statement seem like a rewording of "you don't know what you got 'til it's gone," let me clarify: I can appreciate a story while it's ongoing, but that appreciation is deepened by knowing the end. Much in the way a book or movie can only truly be judged on the second time through when you know where it's all leading. You can place everything in context and appreciate the way it all fits together.


Bowie's death was an especially poignant example of this, given that he passed only two days after releasing a new album on his 69th birthday, after battling cancer for over a year. The fact that he knew Blackstar could be his last album and was able to use the songs (and the videos for the title track and Lazarus) to comment upon his impending mortal leave, well that's just a fantastic ending to a creative life.

But as to the personal connection, I suppose my surprise comes in that I'd never before reflected upon how deeply Bowie and his music had infiltrated my pop culture experiences. I came to Bowie fandom late; I have no childhood memories of him I can call upon. I didn't even see Labyrinth when it came out, which is exceedingly strange considering its combination of music, Muppets, and fantasy was exactly in my 10-year-old wheelhouse. It wasn't until college, during my self-guided tour through pop music history, that I started listening to his music.


I've written before about the sequence of events that led me to my first Bowie album, 1987's Never Let Me Down. I loved that record, and so from there bought the Singles 1969-1993 collection on CD at the local Disc-Go-Round. I listened almost exclusively to the second disc, which starts with "Heroes" and runs through his poppy '80s work. At first the older stuff seemed creaky and odd to me, but then I got my hands on 1972's The Rise and Fall of Ziggy Stardust and the Spiders from Mars and my mind was blown. It's a fantastic record, and the "To be read at maximum volume" instruction at the top of this blog is a homage to it (the back cover reads "To be played at maximum volume"). 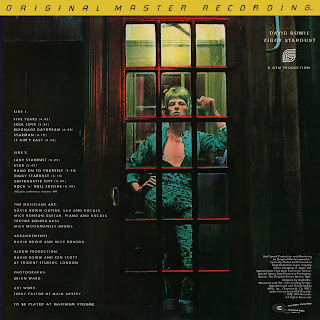 In the lead up to 1997's Earthling, Bowie appeared on Saturday Night Live. That night I had dinner with my dad, step-mom, and a couple of their friends, Ron and Tom. Ron brought up Bowie's SNL appearance, and I said that I'd read the new album was all electronic and a big change in direction. Ron said, "I'll listen to him no matter what he does." That comment stuck with me probably because it was the first time I saw an adult display obsessive fandom. I bought Earthling partially on the strength of that endorsement, and played it quite a bit. In fact, the live acoustic version of that album's Dead Man Walking is one of my all-time favorite songs.


I bought every new Bowie album from then on and enjoyed them to varying degrees, but when The Next Day arrived in 2013, nothing from it caught my ear immediately. So I was on the fence about Blackstar until I saw the video for the title track. I knew immediately that this was something special; the mysterious, creepy visuals accompanying a mysterious song with wild musical mood swings; this was something I could get into. Musically it seemed almost like a revue of some of Bowie's most memorable styles: the electronic, the balladry, the soul, all wrapped up in a new avant-garde jazz setting.

Of course, now the style shifts and lyrics makes sense; it was Bowie's way of looking back while still moving forward. I really think the shock I felt at his death was at least halfway indebted to my strong reaction to hearing that song and seeing that video just a few days before.

The fact that this final revelation came in the form of film should be no surprise. Bowie was one of the first pop stars to recognize the importance of visual presentation (which is why his song Sound and Vision is the most perfect summation of him as an artist). And as such I find that the strongest Bowie memories and associations I have are related to movies or videos.

One rainy Saturday in 2002 I went record shopping in Uptown and purchased the DVD compilation that accompanied the Best of Bowie album that had just been released. I settled in and watched it all the way through that gloomy afternoon and, for whatever reason, that experience stays in my mind as a perfect moment in time. To try explain why that is would be to ruin it, but it's probably safe to say the music was a big part of it. And then of course there's Labryinth, and its unforgettable soundtrack, and there's the Changes quote at the beginning of The Breakfast Club, and there's Seu Jorge's renditions of Bowie songs that populate Wes Anderson's The Life Aquatic (as well as the iconic final scene scored by Queen Bitch). There're nonmusical ones that stick with me too, mainly Bowie's brief cameo as an FBI agent in Fire Walk With Me (the Twin Peaks movie) and his turn as Nikola Tesla in The Prestige.

And that's the bright spot in dealing with the death of an artist you admired but didn't know. Their work and the connections you've made to it are always accessible. Bowie, because of the pervasiveness and range and sheer quality of his creative output, has left us countless cracks in the past through which we can revisit him.

Andrew Fort said…
For me, Bowie was always there in the background even when I didn't notice. The Beatles were ubiquitous and I felt I had heard everything they'd done too many times by the time I was fifteen. But Bowie really only popped up at odd intervals: my sister bursting into my bedroom singing lyrics to "Scary Monsters," or "Changes" on the radio. "Modern Love" at a high school dance. But it wasn't until the FIRE WALK WITH ME cameo that I thought, "I have to check this guy out.

And then his death hit me so hard that I couldn't even listen to his music until now. Thanks for the great post.
1:34 AM