February 03, 2015
Every once in awhile I find myself, when a certain heady mixture of nostalgia and narcissism takes hold, re-reading my old reviews.

Revisiting one's opinions can be frustrating, especially when some of those opinions are more than 10 years old. There's a temptation - I call it the George Lucas Feeling - to go back and revise some of the places where I was overly generous or overly dismissive. But I always resist, mostly because it would feel somehow disingenuous.

But there's one particular review that's been sticking in my craw for the past six months or so. And it's not so much about the album itself or what I wrote about it as much as it is what my changed opinion represents.

Last summer I wrote a post about my favorite artists. I'd devised a stats-driven way to determine which musical artists I loved the most, so I shared the process and results. Immediately after, I began to feel uneasy about what I'd posted. Why? It's hard to pinpoint, but mostly it was the nagging suspicion I hadn't quite gotten it right. It seemed like the criteria I'd used was missing something vital.

Not long before posting that, I had gone to see the band that was #15 on the list, Motion City Soundtrack, in concert for the first time. There was a brief Q and A before the show, and it became evident that several members of the audience gained their first exposure to the band via their forth album, 2010's My Dinosaur Life. And indeed, the audience reaction to the four songs the band played from that record was immense. 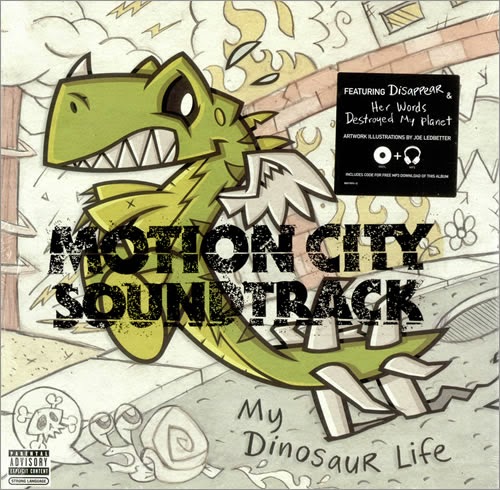 As with any piece of art, seeing an audience react enthusiastically can't help but change one's view of it. And this can go in any direction, really. It can sway an indifferent opinion, confirm or diminish a positive opinion, or reverse or galvanize a negative opinion. In the case of My Dinosaur Life, an album that had disappointed me terribly when it was released, I found my negative opinion beginning to reverse.

The turnaround process actually began with the release of MCS fifth album, 2012's Go. My Dinosaur Life had so damaged my connection to the band that I didn't even realize Go had come out until a few months after the fact. But once I got ahold of it, all was once again well between MCS and I. I wrote My Dinosaur Life off as the band's obligatory bad record.

But then, after the concert, I revisited My Dinosaur Life. While some of my specific criticisms still held (Justin Courtney Pierre does sound like Mickey Dolenz on Disappear and History Lesson; Delirium and @!#?@! are still not favorites), others changed (Stand Too Close is pretty great; I like the pop culture references now). And, more importantly, so did my overall assessment of the album. I found it was actually a pretty good record.

Perhaps this is simply a matter of adjusted expectations. I expected to love the album when I first heard and I expected to hate it when I revisited it, when in reality it was somewhere in between. But there's something deeper than that, and it goes back to that favorite artists list.

As my budget (both temporal and monetary) for music has become limited, I've found my habits adjusting accordingly. Through no conscious effort my interests have become more and more specialized. At first this seemed like the dreaded "narrowing of tastes" that seems to happen in middle age, that point where all new music becomes "noise" and can never live up to whatever band you liked most in high school. But, thankfully, it's not that. In academia, experts start general and go specific. An entomologist knows a lot about the insect world but eventually becomes an authority on moths, or more likely a specific type of moth. A literature professor starts with English 101 and ends up renowned for her knowledge of Nathaniel Hawthorne, or more likely a specific story by Hawthorne.

I've mentioned many times that I have an obsessive personality when it comes to consumption of pop culture. I tend to go all in, and that's what I did for the first 15 years of of my music fixation (roughly 1994 - 2009). In many ways I loved that time: I cast a wide net and found a lot of great music, learned a ton about pop music history (which is still useful at parties), and made a lot of good mix CDs. But it wasn't sustainable. I've written before about how I used to keep an entire spinner full of CDs I had yet to listen to. During that time, with some exceptions, I tended to love a lot of music a little bit.

Now I find myself loving a smaller amount of artists a lot more. I would guess that at the height of my music consumption phase there were approximately 100 artists whom I would have considered essential. What has happened rather organically and unconsciously is that this number has steadily and drastically dwindled. There are a variety of reasons why my interest in an artist might have fallen away, but in most cases it's some combination of their new work failing to excite while the old work gets ignored, with each circumstance feeding the other.

I'm struck again by how much reaction to an artist, album, or song is how much we decide to that we're going to like it. Our psychological relationship to music is so delicate.

And this brings us back to Motion City Soundtrack and my list of favorite artists. I thought MCS's first album was okay, positively loved their next two, and found initial disappointment in My Dinosaur Life. That next album, Go, was really the defining psychological moment thus far. I liked it enough for it to re-energize my fandom of the band and also to encourage reassessment of its predecessor. Had Go been bad, I wouldn't be talking about Motion City Soundtrack in any favorite artist conversation. They have a new LP coming out sometime this year. What reaction will I have, and how will that affect my view of the band as one of my favorites? I have no idea.

And this is mostly why I've given in to that George Lucas Feeling and removed the post I wrote about my favorite artists. I realize I could just ditch the formula and list those artists that have made the "specialized" cut, but it still won't tell the story that needs to be told. No matter what I write, I won't capture the intangible element that makes me continue to go back to certain artists over and over. Nor can I represent the cyclical, ever-changing nature of these sorts of feelings.

After cancelling his planned autobiography in 2011, Billy Joel said something to the effect of "The best expression of my life's ups and downs continues to be my music." So, from a practical standpoint it occurs to me that the most accurate representation of the music I love is, and will continue to be, my All-Time Favorite Albums List.


My Dinosaur Life isn't on there, but it's a lot closer than it was before.