Let's start by acknowledging the fact that Madonna doesn't have a masterpiece album. There's no transcendent Thriller, no Rumours, no Purple Rain in her catalog.

She does, however, have an embarrassment of riches when it comes to singles. In fact, the simplest way to determine her Rock Solid would be to figure out which album had the most hit singles (1986's True Blue, with five hits including three #1s), and then call it a day. But here at 3 Minutes, 49 Seconds, we don't like to do things the simplest way, we like to overcomplicate and obfuscate. So here that goes.

The All Music Guide is fairly high on Madonna's ouvre, giving no less than 8 of her 12 studio albums four stars or more. Well, only one got more, actually. That was Like a Prayer, her 1989 opus, which recieved 4.5 stars. On Amazon.com the same 8 albums boast 4.5 overall ratings, with Like a Prayer winning the percentage game with 78% 5 star reviews. 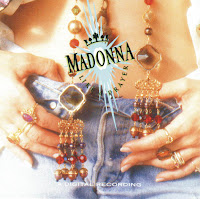 Good ol' Erlewine at AMG says that Like a Prayer is Madonna's "most explicit attempt at a major artistic statement." He says that through the array of styles on the album, the material girl "displays a commanding sense of songcraft, making this her best and most consistent album." Hey Steve, don't do all my work for me, okay?

Amazon.com reviewers echoed Erlewine's assessment. Renni writes: "to me this is the best Madonna album, in this album she deliver the good, and proof that she is a legend alive. and she rock all over........". Bobby believes that Like a Prayer's "emotional, spiritual, and cultural impact remain unrivaled to this very day." And deliciouskarma states that "it would be almost impossible for anyone to disagree that this album is her masterpiece." Deliciouskarma also believes that the album stands with Thriller and Purple Rain as part of the "Holy Trinity of Pop Music Albums" (I guess I should be embarrassed about my opening paragraph, then).

And the raves just keep on coming. Cubdukat says, "If I had to be stuck with just one Madonna album, I would have to make it this one." Yes, and if I had to be stuck with one review of this album, I would have to make it that one. Chazzyb asserts that "anyone who is shallow and ignorant will find nothing enjoyable in this album, because they can not relate to it...it is an album for people who have a deep pool of thoughts." Daniel Jolley concludes that Like a Prayer is "vastly superior to Madonna's previous albums" and then muddies it all up by saying, "I easily recognize this fact, but, in general, I prefer the fun dance songs of earlier years to the poignant, beautiful music that typifies this album."

Finally, there's Mimi Mimi's review: "This is Madonna's best CD! I always have sex on it! At the end during Art of Contribution [sic] I always have my orgasm."

Ahem, okay, well, let's take a moment to compose ourselves.

As seems to be typical, I agree to a point. Like a Prayer is an enjoyable album, whether you're having sex on it or not. But it doesn't even approach anything like perfection. To my ear, it's about half great, one-third mediocre, and one-fifth terrible.

The Good:
The album opens with the strong 1-2 punch of the title track and Express Yourself. Cherish is one of my favorite Madonna songs, just a pure expression of joy. Dear Jessie recalls '60s psychedelic pop in all the best ways; on an album with a Prince collaboration (see below), it's hard to believe that this isn't it, considering it's right in line with his Beatley Around the World in a Day phase. And Oh Father is one of Madonna's best ballads.

The Okay:
Til Death Do Us Part is energetic but lightweight. Promise to Try is obviously heartfelt, but never makes the leap that great ballads do. Spanish Eyes features perhaps the rawest Madonna vocal you'll hear, but is backed by an incongruously slick generic pop sound. And Keep It Together is just a slightly tired R & B workout.

The Bad:
Love Song, the aforementioned collaboration and duet with Prince, is improbably awful. You'd have to figure that putting these two together in their primes would have automatically resulted in something amazing. Maybe they thought that too, and failed to try very hard. Or maybe they were just too busy getting it on (there's no way that didn't happen, right?). At any rate, it's not really a duet since they sing together most of the time, and compositionally it's overlong and meandering. There are some elements that are interesting (such as the build-up to the "chorus"), but it never gets near fulfilling its pedigree and potential. And album closer Act of Contrition is basically this album's Revolution 9, a dissonant sound collage. Like Revolution 9 it's grating, but thankfully shorter. Fans have pointed out its mildly clever conceit (Madonna trying and failing to get into Heaven), but that doesn't make it any easier to listen to.

My personal Madonna Rock Solid has to be 1998's Ray of Light. While being completely different from the rest of her catalog both musically and lyrically, it also sums her up: Forward-thinking, expectation-defying, hit-producing (the title track, Nothing Really Matters, The Power of Goodbye, Frozen). It's no Rumours or Purple Rain, but it's likely the closest we'll ever get.

Richard said…
The 1-2 punch is AMAZING. Belongs in conversations about best album openings ever.
8:24 AM