December 04, 2011
"If you only own one album by Paul Simon it's gotta be [insert masterpiece here]."

Paul Simon is a big baseball fan, so I'll start with a baseball analogy: Paul Simon is to songwriting what Joe DiMaggio was to the national pastime. Both men are undisputed hall-of-famers in their respective fields: amazingly consistent, fantastically talented, and wildly successful. (They had ill-fated marriages to movie stars, too, but we won't dwell on that.)

The numbers are gaudy. Just as many of Joltin' Joe's records still stand today, few musicians have put together a career quite as charmed as Paul Simon has. The Simon and Garfunkel years are nearly untouchable, and of the 10 proper albums he's released as a solo act, none can be considered truly bad. And there are masterpieces sprinkled throughout.

In fact, the AllMusic Guide identifies 3 perfect albums in the Paul Simon oeuvre: His 1973 self-titled debut, the 1974 follow-up There Goes Rhymin' Simon, and 1986's commercial giant Graceland. (Four others fall just short of masterpiece status, with 4.5 stars: Still Crazy After All These Years (1975), Hearts and Bones (1983), Surprise (2006), and So Beautiful or So What (2011)). The Amazon.com reviews are similar but stingier. Only Paul Simon and Graceland get perfect scores, with the latter garnering 91% perfect ratings (I told you the numbers were gaudy). 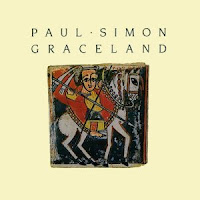 AMG's William Ruhlmann called Graceland "the standard against which subsequent musical experiments by major artists were measured." Which is nice, but in my eyes actually short-changes the album a bit (more on that soon).

Most of the Amazon.com review are, as usual, rhapsodic. Consider Fetish 2000, who says Graceland's "shift through various moods of being Exuberant, Poignant, Reflective, organic, and spiritual and Consistent remain[s] unquestionably impressive."

However, a strange undercurrent of anger runs through many of the reviews. Witness:
Why all the blanket hatred for the '80s? I'm not sure. I don't understand it the way I don't understand why people like music from the '90s. (See what I did there?)

Moving on, Karissa Clark claims, "If you are looking for a way to breathe life and Cajun spice into your life, here's the way to do it! " Or this. And finally, we have the high praise of Raymond Engstrand: "The product is what I expected. It arrived on time and in the condition advertised."

Of course, many reviewers chose to focus on the "world music" aspect of Graceland, and it's probably fair to say that there's no way Graceland would have been the massive commercial hit (14 million in sales) it was without the international dressings. For one, it gave the album a story, and everyone loves that. For another, Simon had been commercially floundering with his old formula. His two previous albums, One Trick Pony (1980) and Hearts and Bones (1983), were both generally considered failures. They didn't sell up to Simon's usual standards, and the critics were not over the moon about them, either. There's nothing especially wrong with either album. Quite the contrary, actually (see below), but the the public is fickle with its musicians, and Simon had held their attention for longer than most. They'd drifted away until Graceland's crazy energy (due mostly to Simon's newfound South African musical inspiration) called them back.

Even so, the album would have been nothing without the typically-strong batch of songs Simon wrote. They're the heart of it all. They were and are amazing compositions, full of the precise lyrical flourishes and keen pop sensibilities that define Simon's career. At its core, Graceland is a singer-songwriter album. A listen to the demos (available on the 2004 remaster) for Diamonds on the Soles of Her Shoes and Homeless prove as much. The music of other lands inspired Simon, obviously, but the songs themselves are just as well-crafted as Still Crazy After All These Years, or 50 Ways to Leave Your Lover.

No song personifies the songwriting strength of Graceland better than the shimmering title track. In it, Simon and his son make a pilgrimage to Elvis Presley's homestead, envisioning it as a secular heaven, a place to repair broken hearts. The line that always gets me is: “Losing love is like a window in your heart / Everybody sees you’re blown apart." Simon himself has named it the best song he's ever written, which, considering his catalog, is a bold statement.

That Was Your Mother is a another songwriting highlight. It's perhaps the least sentimental, but most truthful, song ever addressed to a child. Check out this chorus: "Well that was your mother / And that was your father / Before you were born, dude / When life was great / You are the burden of my generation / I sure do love you / But let's get that straight." Before I became a parent, that "burden" line seemed harsh, but I kinda get it now.

So, yes, Graceland is a great achievement. And it's it's a very fitting Rock Solid. But it's not my favorite Paul Simon album. For that, we have to go back a few paragraphs. The underloved Hearts and Bones is my go-to. I'm ever the sucker for a piece of art that is nakedly personal, and Hearts and Bones is exactly that. I'd say more, but you can read my detailed thoughts here.

As I reflect, there's one significant flaw in my comparison of Joe DiMaggio and Paul Simon. DiMaggio retired from baseball in 1951, at the age of 37. All of his greatest accomplishments (marrying Marilyn Monroe aside) were behind him. Paul Simon made Graceland in his mid-40s. And even if we take that as his peak, he's continued to make high-quality music for 25 more years. No need for the nation to turn its lonely eyes to him; he's been in front of us the whole time. And we're all the richer for it.

senormedia said…
I'd have to go with Still Crazy After All These Years, if just for the fade "Nothin' but the dead of night"s of My Little Town (not that that is all there is to the album, of course).
9:20 PM