It's an established truism in the music industry that you can never count a good band out. A lesser-known but no-less-true correllary is that you can't really count the bad ones out either.

And thus we have Refrigerated Love, the British group Stephen Thomas Earlewine once called "the chronic bronchitis of rock."

It's been a wild ride since their 2008 reunion release No Expiration Date. That album found modest success, mostly due to ironic attention from hipster bloggers, and the band went back into full swing. In 2009 they put out a spiritual follow-up to their 1994 all-female cover album We Refuse To Pun the Word Cover. The album, Coming In, featured the band's renditions of tunes by gay artists such as Judas Priest, Husker Du, Ricky Martin, and Indigo Girls. Despite excellent song selection, the album tanked.

This began yet another dark period for Refrigerated Love. In 2010 Lead singer Colin Porthorn served as a judge on the disastrous reality series Sing For Your Life. Billed as a combination of Survivor and American Idol, the show placed contestants in life-threatening situations and required them to perform their way out. Porthorn's merciless "I don't see the passion" comment, often delivered before sending an off-pitch contestant to his or her apparent death, became a popular catchphrase briefly. After only three episodes, ABC cancelled the series due to pressure from reactionary parent groups and human rights activists.

Subsequently, and more tragically, Porthorn's attempt to cash in on his new fame with the solo power ballad Show (Me) Your Passion failed miserably. Despite being offered free as the iTunes Single of the Week, no one downloaded it.

In the meantime, lyricist Elvis Hornman was fired. Rumors of bitter feuds between Hornman and the rest of the band members had simmered since the mid-'80s, most traced back to Hornman's penchant for indiscriminately eating food out of the tour bus refrigerator, impolitely ignoring clear shelf labels.
Apparently the boys had finally had enough. Hornman, a notorious absinthe fiend with no musical ability, promptly laid claim to the Refrigerated Love name and declared his intention to tour with replacement musicians, setting off a bitter legal battle. Hornman lost, and has been touring under the name "Elvis Hornman's Frozen Romance". Catch them at your local depressing bar this winter.

Completing the triumvirate of tragedy, the band were unceremoniously dropped by their label, Polydor. In a terse statement, the label said simply, "It's not us, it's them." 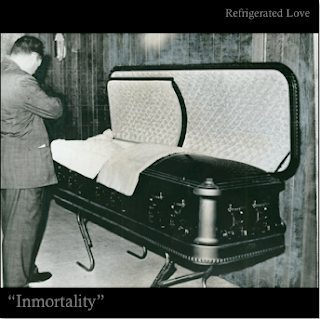 Given this run of bad luck, it's a minor miracle that the band have soldiered on. Yet here we have their newest effort, Inmortality, which the band is releasing without a label. In a recent interview with Rolling Stone, guitarist Nigel Hornblower said, "Record labels are like dinosaurs. They roam the Earth, obsolete." Added keyboardist Hornel Lieberman, "With the advance of technology, we can take the songs right to the people with no middle man. We make all of our money off of t-shirt sales anyway."

Thus, the album is available on traditional outlets such as eMusic, iTunes, and Amazon.com, or directly through the Refrigerated Love website, where fans can pay $50 for a deluxe download package that includes a "poster-sized jpeg" and "extensive liner notes in .txt format". For an additional $5, "Refrigerated Love will friend you on Facebook!"

Initially, no member felt confident enough to write lyrics in Hornman's place, so the album began as a scat project. When recording sessions stiffed, the band took a 4 month hiatus. When they reconvened, they began to move forward by looking back. During the break, Hornblower audited a community college course called Lyrics as Poetry 102, and his mind was sufficiently blown. Said Hornblower: "Most of the most respected rock lyricists out there - Bob Dylan, Britney Spears, Gene Simmons - write lyrics that make little-to-no sense. They're just words strung together. And we thought, well, we can do that."

And indeed they have.

On several songs, the band members chose to collaborate in an exquisite corpse sort of style, and the result is the most lyrically impenetrable album in the Refrigerated Love ouvre. Take the ponderous opener, Sounds Like an Impressionist Painting, for example. The song starts as an indictment of sensationalist news exposes and ends up as an ode to a turtle sunning itself on a rock. Iridium is little more than a chanted list of transition metals, in alphabetical order (the didgeridoo backing from Lieberman is haunting). And Karaoke Night features such couplets as, "I saw you on the teeter totter / I've got myself a small pet otter" and "Never lose that magic touch / So and so and such and such." Oh, and there's no mention of karaoke anywhere in the song.

Elsewhere, thankfully, the band members took solo turns at composing lyrics. And while the results aren't always good, at least they are coherent. Porthorn offers up Mate, a reverse-double-entendre-laden ballad that seems to be about sex, but is really about friendship. Cue the awkward moments when you're driving with your friend and this tune comes on. Muscular rocker Get Over Here, on the flip side, both seems to be and actually is about sex. The chorus, "Get over here, and get under me / Get over here, I'll be on top" might have served as a Schoolhouse Rock lesson on prepositions, if not for the explicit content. Porthorn's final contribution, Amelia, first seems like a lost track from his Mystery Pants solo album (which featured 10 songs with women's names as titles), but is actually a surprisingly accurate retelling of Amelia Earhart's life.

Guitarist Hornblower contributes Fill Me and In Decay, both of which reflect his well-documented obsession with composting. Hornel Lieberman, long considered the hidden talent of the band, wrote the lyrics for Black Tie Only, a folk-style story song about a plucky young man trying to make his way in high society, and Under the Tundra, a dense and rhythmic bit of slam poetry. And even drummer "Pasty" Pete Pockhorn, the only Refrigerated Lover to have never made a solo album, gets in on the act. He's responsible for the abrasive Possessive Rant, which wins the award for the most accurately-titled song on the album, and  It's Been a Long, a surprisingly thoughtful and strummy number that might just be about everything the band has been through together. Perhaps appropriately, the song ends abruptly mid verse.

But that's not the end. Following 12 seconds of silence, a two note piano drone starts up. After 12 minutes of that you're rewarded with a bonus track. In the liner notes, the bonus song is labeled as No Comment, and is credited thusly: "Music by Refrigerated Love. Lyrics by ???" This lack of credit has set of a firestorm of Internet speculation as to who contributed the words. Some suspect Elvis Hornman wrote the lyrics and will soon be welcomed back into the fold. Other signs point to Steven Sondheim as the composer. All parties thus far have played it coy.

The song itself is a mid-tempo pop number full of harmonies, not dissimilar to a mid-period Hollies track. Lyrically, it's a withering condemnation of the culture of Internet comment sections. Sample lyrics: "I must be a Billy Goat Gruff / Cause you're a troll whose makin' life rough" and "You'd never be that rude in person / Because you know you'd get a hurtin." It's insightful, timely, and clever, three things that are exactly the opposite of what one expects from Refrigerated Love.

And thus once again we find that we may have underestimated Refrigerated Love. Not to worry. They'll surely let us down again. That's another truism of pop music, one you can bank on.

Grade: B-
Fave Song: It's Been a Long

Want more Love? Check out the updated Band History and Discography (we're still waiting for approval to put these up on Wikipedia).