Welcome to Rock Solid, where we fill in that blank. Our goal is to pseudo-scientifically determine the best, the beloved, the most classic album in an artist's catalog.


The declared winner will be subjected to the Thriller Test (do I need to explain the name?), a set of 4 criteria an album should meet to be considered a masterpiece. Those are 1) at least 3 hits, 2) great album tracks that sh/could have been hits, 3) no filler, and 4) memorable cover art.

You probably think this one is a no-brainer. The album cover that comes to mind when one hears the words "U2's best album" probably features black bars at the top and bottom and a black and white photo of the band in the middle of the desert (in medium shot, bunched up on the left hand side). The Joshua Tree, 1987's epic breakthrough that featured Where the Streets Have No Name, I Still Haven't Found What I'm Looking For, and With Or Without You, is U2's best-selling and best-known album.

But it's not their best-reviewed and best-loved.

You may have forgotten about a little number called Achtung Baby, 1991's epic dirty pop masterpiece. Can you believe it's U2's only album to receive perfect overall ratings from both the All Music Guide and Amazon.com reviewers?

Superlative Stephen Thomas Erlewine of the All Music Guide says Achtung Baby is "vibrant and endlessly inventive." He also feels that, "Few bands as far into their career as U2 have recorded an album as adventurous or fulfilled their ambitions quite as successfully...and the result is arguably their best album." 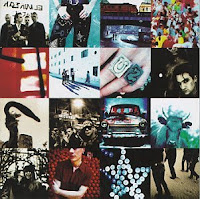 Amazon.com fan reviewers are similarly gob-smacked. DJ Jazzyjoe finds Achtung Baby to be "easily U2's best, if not the best of the entire 1990's." Ape-Dawg does him one further, stating: "Achtung Baby is BY FAR the BEST U2 album, as well as one of (if not the BEST) albums of the 90's, and of all time!" David H. says simply, "U2 can never top this."

M. Fine believes "this is a musical classic as much as The Three Musketeers is a literary classic." An anonymous reviewer adds: "This is the album that every human being NEEDS to own!" I propose therefore, that upon birth every baby should be given a copy of The Three Musketeers and Achtung Baby. Maybe then our test scores will go up.

Kevin Day is so inspired that he mixes up his metaphors: "This album is filled with moods and colors that not only change the atmosphere of the room, but turn it on its head." Then Lazarous072 shows him how to do it right: "Not to slight the Beatles in any way, but Sgt. Pepper's is a whole greater than the sum of its parts--not the band's best collection of individual songs. Imagine experiencing Pepper as being hit in the back of a head with a frying pan, whereas Achtung Baby is a collection of 12 separate painful pins sharply stuck all over your body: they each hurt equally, and in a different place, a different way." Well played, sir!

Finally, even "Bono" himself chimes in: "I love all these wanna-be Rolling Stone employees, with thier  15 paragraph reviews and fancy words they had to look up in the dictionary. Here is my review for Achtung Baby - best U2 album made."

I totally agree. Achtung Baby has always been my favorite U2 disc. I love how it finds Bono turning away from the soul-searching of The Joshua Tree and the world-beating of Rattle and Hum to examine different aspects of relationships (romantic and otherwise).  I love how much of a musical 180 the album was from its predecessors, adding new weapons to the U2 arsenal (the most powerful being the Edge's buzzy new guitar tone). But most of all I love the songs themselves.

Let's see how it does on the Thriller Test.

1) At least 3 hits
Achtung Baby placed four hits in the U.S. top 40: Who's Gonna Ride Your Wild Horses, Even Better Than the Real Thing, Mysterious Ways, and One. The latter two went top 10, and One might just be U2's crowning achievement, whether you choose to see it as being about a romantic relationship, world peace, or the band itself. Pass

2) Great album tracks
Hell yeah. Zoo Station, So Cruel, Ultraviolet (Light My Way), and Until the End of the World are all alternate universe hits. The Fly was actually the first single released from the album and though it did well overseas (#1 in Ireland, Australia, and Britain), it stiffed in the U.S. Pass

3) No filler
The album's final two tracks are less memorable than the others, but they are difficult to dismiss. Acrobat features searing guitar work and some surprising toughness from Bono ("Don't let the bastards grind you down!") And the musical slow burn of closer Love is Blindness puts the focus squarely on the dark truth of the lyrics. Pass

4) Memorable cover art
Certainly not as iconic as some of the band's other album covers (War, The Joshua Tree, Rattle & Hum), it's at least instantly recognizable and representative of the music within. However,  it wouldn't make a list of the 100 best album covers of all time. Pass, barely

To be fair, there are probably at least two other U2 albums could also pass this test. But instead of seeing it as a deciding factor, I see it as evidence of Achtung Baby's worthiness.

So there you have it: A rare case where the fans and critics agree with each other, and manage to get it right. Savor the moment.

Uncle E said…
First, great post, well written as always. Second, I've gotta tell ya that I stopped caring about anything U2 has done since 2000. My opinion is that they have been releasing the same basic album since "All That You....". The edge (pun intended) they used to have, is long gone. They are the Rolling Stones, now. I'll still have Achtung Baby, and War, and even Zooropa (my personal fave), but I will not buy another U2 release ever again.
3:14 PM

senormedia said…
It's Rattle and Hum for me. Much more organic than anything else they have done.

Achtung Baby is pretty much when I stopped paying attention except in very short (single-length) bursts.
9:34 PM

Hotmail is known as the first email service in the world which is provided by Microsoft. Similar to Email accounts of Google or Yahoo, Hotmail is provided to users free of charge with easy account creation and high security.
hotmail sign up | log in to hotmail | hotmail review | close hotmail account | create a hotmail account