* * *
If you're an astute reader of 3:49 with some knowledge of the XTC discography, then you'll be able to guess which XTC album has been designated Rock Solid. See, I've been reviewing XTC's albums chronologically, and the last proper XTC album I reviewed was 1984's The Big Express. 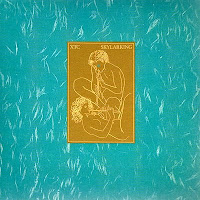 So it should come as no surprise that the XTC's Rock Solid is the follow-up, 1986's Skylarking. But how did we get there?

Well, Skylarking is the only XTC album to receive a full combined 10 star rating from the All Music Guide critics and Amazon.com reviewers. There was no other album that truly challenged this supremacy, though it should be noted that five additional albums (Drums and Wires, Black Sea, English Settlement, Nonsuch, and Apple Venus Volume 1) tied for second place, each with 9 stars.

Skylarking, by nearly every account, had a difficult birth. The band fought with each other and with producer Todd Rundgren (famous for his own hits Hello, It's Me and Bang On the Drum All Day, for producing Meat Loaf's Bat Out of Hell, and for playing surrogate father to Liv Tyler). But the results are hard to argue with.

Of Skylarking, critic Stephen Thomas Erlewine wrote, "Each song is a small gem, marrying sweet, catchy melodies to decidedly adult lyrical themes." He also calls the record a "pop masterpiece -- an album that has great ambitions and fulfills them with ease.

Amazon.com reviewers were similarly ecstatic. Check out this sampling of accolades:
It's become a rarity in this feature, but I find little to complain about with this choice. Let's take a closer look at the album. Skylarking is often praised because it feels like a complete listening experience. The thing is, I'm not sure why. There's no recurring theme, recurring characters, or intros and outros, and the songs are quite sonically different. One might say there's a romantic, pastoral feeling to the record, but that's really only present in a handful of songs (Summer's Cauldron, Season Cycle, Grass, Ballet for a Rainy Day, 1000 Umbrellas). So if that doesn't explain the album's brilliance, what does?

Basically, a good batch of songs performed and produced well. It's that simple.

Andy Partridge's contributions are uniformly strong, packed with imagery and melody. Especially notable: That's Really Super, Supergirl, where our narrator has been dumped by his heroine ("And I'm here in your Fortress of Solitude / Don't mean to be rude / But I don't feel super"). It's perhaps the most power-poppy song the band had recorded to that date. The ringing Earn Enough for Us is basically a caffeinated rewrite of Love on a Farmboy's Wages from Mummer, but with the singer serving as a bus driver instead of a farmhand. Another Satellite finds Partridge in prime egotist mode, rejecting a lover because she'd just be another moon clogging up his orbit (However, I'm pretty sure he ended up marrying the girl he wrote this about). And the jazzy would-be spy theme The Man Who Sailed Around His Soul manages to be navel-gazing and extroverted all at once.

Singling out certain songs may have the effect of belittling others, but that's not the intention. Andy's only slightly weak track is the pretty-but-slight Mermaid Smiled, and it's evidence enough that on many U.S. versions of the album that song was swapped out for Dear God, a B-side that unexpectedly (but not surprisingly, in retrospect) caught on at college radio stations.

And what about Dear God? Well, it's brilliant. Of course it can't capture all of an atheist's doubts in one song, but Andy nails one of the main ones: Why would an all-powerful deity allow such awful things to happen to his/her followers? The song is full of choice lines, but this one always gets me: "You're always letting us humans down / The wars you bring / The babes you drown."

Colin Moulding's songwriting re-emergence (after a sub-par Dukes contribution and only two songs on The Big Express) is also a big factor in Skylarking's success. He placed 5 songs on the album, which is the highest number on any XTC album before and since. Grass is sly and sexy, alluding to outdoor escapades, but also having fun with the title term being slang for marijuana ("It would shock you too, the things we used to do on grass."). The Meeting Place is equally libidinous, this time detailing a midday dalliance between factory workers. Big Day finds our narrator giving pragmatic advice to a groom on his wedding day: "Could be heaven / Could be hell in a cell for two" and "There's a lesson to be learnt / Many fingers have been burnt by the touch of gold." Colin apparently wrote it for his son. Optimistic fellow, him.

Moulding's final two songs are also the final two on the album, and they always feel like sort of a let-down to me. I think that's intentional, as the sun begins to set and the album closes up shop. Dying is a bracing, (mostly) minimalist number wherein Colin mourns the passing of an elderly neighbor and at the same time considers his own ultimate fate. Sacrificial Bonfire continues the melancholy mood, at least musically, while the lyrics speak of banishing evil, which makes for an odd mix. Taken on their own, they're clear weak-links, but in the context of the album, they serve their purpose well.

So, in case it's not clear: Skylarking is a very deserving Rock Solid. It's not my favorite XTC album, however. That'd be Nonsuch, and I'll tell you why next time.

Richard said…
I can't wait to read about Nonsuch! Intellectually I know that Skylarking deserves to be considered XTC's best album, but I enjoy Nonsuch more.
7:38 AM

Alex said…
I've always thought Drums & Wires or Black Sea were stronger than Skylarking, which always sounded kind of poorly recorded to me.

Oddly enough, Andy Partridge agrees and thinks he knows why: "All previous [Skylarking] vinyl and CD's (including the flashy US Fidelity version unfortunately) have been manufactured with their sound polarity reversed. In laymans terms this mix up means that sound waves that should be pushing out from your speakers are actually pulling them back and projecting from the rear. Something as simple as a wrongly wired XLR plug in Todd's studio or the Master room would have resulted in this sound mishap. Making the record sound distant and thinner... The original tapes appear in very good condition and with this problem now rectified APE will be able to present to you shortly a splendid double deep vinyl cut of this classic XTC album as it was intended to sound, but never has done due to human error."

Taking some time to actually read some beloved blogs from the past--- and hit across this. Skylarking has always been my most favorite, life changing album of all time. Best played on the 1st day of spring. I could talk XTC songs and albums all night long, but I need some shut eye :)

I met Andy Partridge in 1998 and completely gushed to him about what a masterpiece it is. I'm pretty sure I scared him back to Swindon.

Nonsuch is for sure my second favorite, followed by English Settlement. I love Rag & Bone Buffet as well. Extrovert is a great tune.
11:07 PM

senormedia said…
The Dukes of Stratosphear is my favorite XTC album. :)
10:55 PM