June 01, 2010
"If you only own one album by The Rolling Stones it's gotta be [insert masterpiece here]."

Holy logjam, Batman! The Rolling Stones have no less than 8 albums statistically tied for Rock Solid status. That's definitely the most so far. We can choose to attribute this to the band's sheer longevity, or we can choose to believe they truly are The World's Greatest Rock 'n' Roll Band. I'm leaning toward the former.

To break up the logjam we have to look the percentages of five star ratings within the 4.5 star average on Amazon.com. And then it becomes clear : With an impressive 87%, Sticky Fingers is our winner. 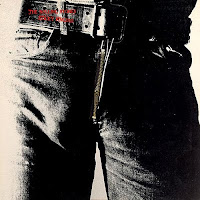 The All Music Guide's tireless Stephen Thomas Erlewine finds that Sticky Fingers has "a loose, ramshackle ambiance that belies both its origins and the dark undercurrents of the songs." He also praises its "offhand mixture of decadence, roots music, and outright malevolence."

As per usual, the hyperbole birds come out in full force on Amazon.com. Loren sez: "In my not so humble opinion, Sticky Fingers is the greatest rock n roll album of all time." Charles R. Stewart III remarks that Sticky Fingers, "will be my favorite album until I die....then they can bury me with it..." And hopefully they remember the record player, too. James McDonnell believes that, "In 50 yrs. they will still be playing this album at college dorm parties." But Patrick Farrelly, obviously speaking from experience, warns: "In a lame crowd, this is an instant party killer."

And though Amazon.com reviewers are rarely known for their vocabularies, two, count 'em, two reviewers used the word "apotheosis" (a Greek term meaning "the appearance of a theme in grand or exalted form") in their review: The Dirty Mac ("Here we've got the Stones at the apotheosis of their raunchiness, decadence and political incorrectness") and Nathan ("with the Mick Taylor period, the Stones reached the apotheosis of their own, unique, mature sound").

But does Sticky Fingers stand up to the Thriller Test?

1) At least 3 hits
Oooh, this is close. Brown Sugar and Wild Horses are the only bonafide hits on the album. Both are instant classics, with the horns highlighting racy lyrics about interracial sex (other interpretations say it's about heroin, for which the title phrase is slang) on the former and the latter is a genuinely-felt statement of commitment in an f-ed up relationship (romantic or familial, I'm unsure). No other songs were even released as singles. Fail (Though to be fair, only one of the 8 Rolling Stones' Rock Solid contenders features more than two hits; more on that momentarily).

3) No filler
Amazon.com reviewer Robert Bykowski feels that "of the Stones' 'golden four' albums (Beggar's Banquet, Let It Bleed, Sticky Fingers, and Exile on Main Street)," Sticky Fingers is the best because "though each of the four is an unquestionable masterpiece, the other three DO have at least one or two filler tracks on them." I'd argue with him on You Gotta Move (unremarkable minimalist blues), Moonlight Mile (hypnotic and mysterious if you're in the right mood; boring if you're not), and I Got the Blues (not bad, but it's standard stuff). Fail

Um, yeah. Whichever way you swing, you have to give kudos. Andy Warhol provided the cover photo (it's not Mick's crotch, in case you were wondering) and the original vinyl had a workable zipper! Bonus for this being the first Stones album to sport the lips logo. Pass

So, a sound fail on the Thriller Test (which doesn't mean Sticky Fingers isn't a good album, by the way; it is). So what deserves the spot instead?

Well, I'd be remiss if I didn't mention Exile on Main Street, especially in light of its recent reissue and its status as the "it pick" for Stones' masterpiece. The rambling double album performed okay at the time of its release and started to pick up steam later thanks to ardent rock snob support, culminating in Rolling Stone placing at #7 on their "500 Greatest Albums of All Time" list (Sticky Fingers was only at #63). Exile has some great moments, but I'm glad it wasn't Rock Solid (in fact, it fell out at third place overall, with Beggar's Banquet taking second).

My own personal favorite is Some Girls, and I'm willing to put forth that it actually does pass the Thriller Test. It's got 3 hits (Miss You, Beast Of Burden, and Shattered), lots of killer extras (When the Whip Comes Down, a cover of Just My Imagination, Respectable, the title track), and not a dull moment. Plus, the cover art is interactive, weird, and arresting.

Anonymous said…
Finally! Someone agrees with me regarding *Some Girls*. This subject is the proverbial dead horse at family gatherings. (Yes, one side of the family is rife with Stones fans. Gets tricky when whippersnappers who like AC/DC and John Mayer enter the fray.) Excellent post.
2:21 PM

I wish Rolling Stones albums were discussion topics at my family gatherings...
2:39 PM