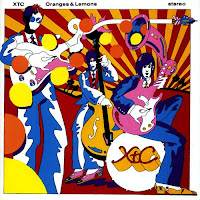 It was 20 years ago today. The RIAA first warned parents about explicit content, the Cold War ended, and Driving Miss Daisy won the Oscar for Best Picture.

Over the next few months, I'll be looking back at 5 seminal (well, depending on your definition of the word seminal) albums from 1989. Now...

Oranges and Lemons was the first XTC album I bought. It was 1996, and I found it in the discount section at Target. I knew of the band, but hadn't heard a note. All I needed was that cover art to convince me to pony up my $5.99. It's some of the best money I ever spent.

Recorded in L.A. with producer Paul Fox (10,000 Maniacs, Phish, Semisonic, Bjork, They Might Be Giants), Oranges and Lemons was the band's 9th album, and a thoroughly successful attempt at making immaculately-produced, commercially-viable music without sacrificing the incisive lyrics and ultra-melodic songwriting that the band had made its trade for the 12 previous years. As such, and given the momentum and recognition the band had thanks to the success of Dear God on their previous album, Oranges and Lemons should have been the album that finally moved XTC's beyond cult status and made them a household name.

We all know it didn't happen that way. Though XTC did everything right (great production, several potential singles, lots of promotional appearances), the pop gods simply didn't deem their work worthy of superstardom and international acclaim. That doesn't change the fact that Oranges and Lemons is a very good album, as colorful and imaginative as the cover art.

The album found lead songwriter Andy Partridge confronting fatherhood. Though he had a daughter, Holly, earlier, the arrival of son Harry seemed to stir up some strong feelings. Album opener Garden of Earthly Delights is a joyous celebration of the event. Andy welcomes his son into the world and tells him it's his oyster. Besides a list of some of the pleasures available in the so-called garden, there's also some fatherly advice, including: "just don't hurt nobody / unless of course they ask you." Pink Thing, likewise, is about a newborn child. But since Partridge is a perpetual 13 year-old, he fills it with double entendres that could also be referencing a penis. Once you get over the icky factor of that, it's actually pretty funny, especially the line, "I wanna take you out and show you to the girls." Finally, there's Hold Me My Daddy a musically-strong, lyrically-open song addressed to Partridge's own father. Perhaps inspired by his own experiences with being a father, he acknowledges his debt to his father, and pleads for an open exchange of emotion.

The album is also, as mentioned, rife with potential hits. These are led off by the almost-actually-was-a-hit Mayor of Simpleton. Here, Partridge plays a man who, though not book-smart, is confident in his abilities as a lover. Though Partridge is obviously not as unintelligent as his narrator, he certainly wasn't fronting on the line: "Well I don't know how to write a big hit song." Maybe it was wishful thinking that irony would prove him wrong.

Merely A Man is a cousin to that song. Once again, Partridge's narrator downplays his individual significance in the face of love's power. But rather than romantic love, Partridge is focused on self-love and inner-divinity: "I had no message and the message was / we're all Jesus, Buddha, and the Wizard of Oz." There's also some guitar-playing that's hair-band worthy AND a trumpet solo. Finally, there's the singalong The Loving, which continues the hippieish vibe: "All the rich and poor / Even those we fight in war/ need the loving." It's as optimistic and open as a cynic like Partridge gets.

Speaking of that, bassist and second songwriter Colin Moulding offers three uncharacteristically dour tunes: King for a Day, One of the Millions, and Cynical Days. The first was another single, and though it sounds radio-ready, the lyrics are about the rat race, corporate greed, and the futility of working a job you don't love. Not your usual pop song fodder. One of the Millions is similarly non-traditional; Colin's personal rebuke to himself about not standing up for himself more often. It's not a typical rock-star sentiment, especially when he says: "I won't rock the boat / 'cause I'm scared what might happen." Finally, there's Cynical Days, a jazzy tune about the darkness Colin sees in the world. He's not completely hopeless, though, as he pleads, "help me through these cynical days."

Oranges and Lemons also finds Partridge showing off his ability to make social commentary through fanciful extended metaphors, like a children's author (I'm thinking Lewis Carroll or Norman Juster). It also happens that the three songs that feature this device are also three of the best on the record. First is Here Comes President Kill Again, a screed against world leaders who would use their position of power to promote anything but peace. The song hit way too close to home the last few years. The additively percussive Poor Skeleton Steps Out is a commentary on equality, portraying skeletons as the ultimate subordinate group, with no control over any aspect of their existence. "Poor skeleton steps out, dressed up in bad blood, bad brains, bad thoughts, and others deeds / poor skeleton no doubt, one of these days, you can cast aside your human, be free." The best of the three is Scarecrow People. The listener finds herself on a visit to the land of scarecrows, which is eerily similar to ours: "There's lots of waste and razor wire and no one gives a damn about the land, we just stand around and stare like you folks do." The scarecrows want advice, too: "Now while you're here, can you advise us on a war we'd like to start / against some scarecrows over there, a different shade?" The best part of the song is when the fiddle comes in to give the whole thing a hoedown feeling. It's as close as XTC ever got to a country song.

The album wraps up with some challenging songs, proving the band weren't totally selling out. Across This Antheap features a kitchen sink full of sounds: trumpets, keyboard flourishes, hissy background vocals, and a clanging, persistent rhythm. It's almost difficult to listen to. Miniature Sun is the album's second jazzy tune. It features a great bridge, and the joy and sorrow of love all mixed up in 4 minutes, but still seems to meander.

The album wraps up with Chalkhills and Children, a gentle, subtle (unlike the Dukes of the Stratosphear song Pale and Precious) Beach Boys tribute. The titular Chalkhills are in his XTC's hometown of Swindon, and the children obviously refer to Partridge's own offspring. In the lyrics, he wonders whether or not he can continue to be in a band and strive for success while life pulls him in other directions: "I'm soaring over hushed crowds, I'm propelled up here by long dead dreams / Still I'm getting higher, Icarus regrets and retires puzzled?" If I had been a fan when this actually came out, I would have worried that it signaled the end of the band. It sure sounds like a swan song. Luckily we'd get three more albums out of the band before they called it a day.

Oranges and Lemons may not have brought platinum sales, but it's still a very showy feather in the amazing cap of XTC's career.

Alex said…
I still want to live in the alternate universe where XTC's amazing output in the 1980s made them the superstars they deserved to be!

One of the stronger albums from a career chock full of strong albums.
3:27 PM

Uncle E said…
I agree with Alex, here was a band that defined the 80's (in addition to Squeeze) for me. But, XTC were more versatile and I think ultimately better songwriters. This albu, was released around the same time as their alter ego Dukes Of Stratosphere, right, and it followed in that tradition of psychedlia and is an overall wonderful album and one of the best in their catalogue.
11:05 PM

Alex said…
As I recall, this album's credits include a thank-you to the Dukes of Stratosphere "for lending us their guitars."
8:53 PM

Unknown said…
XTC had that infamous message in the liner notes of 1986's Skylarking, not Oranges & Lemons.

It is a great shout out to their alter egos and the only written, recorded connection between the two bands. I love it!
10:32 PM