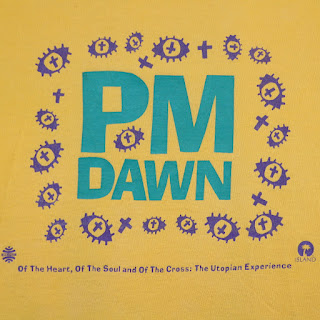 A quite misunderstood group lumped in with the early '90s daisy age hippie-hop movement (De La Soul, Arrested Development, etc.), P.M. Dawn actually went through a startling transformation over their 5 albums. And of course, their harmony-laden ballads could not be more Valentine's Day appropriate.
1. "Set Adrift On Memory Bliss" (from Of The Heart..., 1991)
Take a sample of Spandau Ballet's True, add a hi-hat, and Prince Be's laid-back rap and you've got an undeniable vibe. However, if this is all the band had been capable of, they would have disappeared much sooner.
2. "Reality Used To Be A Friend Of Mine" (from Of The Heart..., 1991)
Honestly, I just picked this one out of love for the title.
3. "I'd Die Without You" (from The Bliss Album...?, 1993)
Here's where the surprises start. Turns out P.M. Dawn were not truly a rap act, they were a vocal group. This sappy ballad became a huge hit, but were people surprised by the change? It'd be like Soulja Boy suddenly putting out a smoking R & B tune.
4. "Looking Through Patient Eyes" (from The Bliss Album...?, 1993)
A George Michael sample powers this spiritual cousin to "Set Adrift On Memory Bliss."  Light rapping combines with harmony-filled singing to create the band's signature sound. And Prince Be's lyrics are just screaming to have a college-course analysis.
5. "The Ways Of The Wind" (from The Bliss Album...?, 1993)
Another easily-ignored aspect of P.M. Dawn is their strong compositional skills, of which this song is a great example. Lots of different elements combine, but never overwhelm or contradict one another. In another reality, Prince Be could have been a producer-hitmaker on the Babyface/Neptunes level.
6. "Downtown Venus" (from Jesus Wept, 1995)
On the opening cut from their third (and best) album, the boys rock it up a little bit. I love the self-searching aspect: "I could be into me, but I don't know what I'm like."
7. "The 9:45 Wake-Up Dream" (from Jesus Wept, 1995)
A very cryptic tune, built on a fuzzy electric guitar line. I wish I could sleep until 9:45...
8. "Why God Loves You" (from Jesus Wept, 1995)
Though it could easily be mistaken as Bible-beating, this is actually a tune about self-acceptance. At the end it devolves into an awesomely unexpected James Brownish chorus of "Oh My God!"s.
9. "I Had No Right" (from Dearest Christian..., 1998)
The full title of their fourth album is Dearest Christian, I'm So Very Sorry For Bringing You Here, Love Dad. And so this very pretty song is actually an extension of that, with Prince Be apologizing to his son for bringing him into such a harsh world. "I had no right," he sings, "bringing you here / knowing what I know / feeling the way I feel."
10. "Faith In You" (from Dearest Christian..., 1998)
So the whole album isn't a bummer. This song is also to his son, an affirmation of belief in his ability to transcend and succeed in life. Beautiful stuff. Bonus: It can also double as a nice love song.
11. "Hale-Bopp Regurgitations" (from Dearest Christian..., 1998)
I actually like "If I Could Be Your Star" better, but in the interest of avoiding too many sweet ballads, I chose this commentary on our fleeting media-driven pop culture. Amidst references to Amy Fischer, AOL, Jeffery Dahmer, O.J., Prince Be proves himself a prophet: "I should have known not to throw away my records / I should have never purchased compact discs." Indeed.
12. "Be Bastard" (from Fucked Music, 2001) A fan-only release features a the first bona fide rap song by the group in years. Prince Be is not going to upset Eminem or Jay-Z in any battles, but he knows that: "I ain't the dope, but I'm better than most / I let the butter soak it up like I'm holy toast."

DDay said…
Yes, credit is definitely due for PM Dawn. I've always loved their Jesus Wept album, lots of variety in it. Where are the guys now, by the way? Have they morphed into Gnarls Barkley ;-)
It's a very personal suggestion (I used to be a Prince collector), but I would add the closing track for that album: a medley of 3 cover versions: 1999, Once In A Lifetime and a fantastic version of Harry Nilsson's Coconut. That last one always brings a smile to my face.
I definitely need to pull out my copy again and give it another listen.
Keep on blogging!
8:28 AM

Robert Cass said…
I think "Plastic" is terrific funk and a great response to those who think Prince Be can't be "hard."

TERRY said…
i have fucked music and the unreleased cd.i was lucky enough to have bought an autographed copy of both some years back.classic material
9:12 PM

Alex said…
Would love to hear the tracks on unreleased vol 1. Being a hardcore fan I own all the official single and album releases from PM Dawn, and was absolutely gutted when my order for f*cked music/unreleased vol 1 didn't go through.
5:25 AM

Anonymous said…
"Jesus Wept" -- and all PM Dawn's albums, really, but especially that one crucial one -- will always be in my Top 10 albums no matter how many hundreds I may continue to get. I hadn't listened to it in a few years -- I've gotten a bit too ipod-shuffly for my own good.

So tonight the kids and my wife weren't at home for a few hours (a rarity) and I put on "Jesus Wept" at really LOUD volume and it was like all the lights went on again -- I realized how crucial this album was to a certain period of my life, and to my ongoing personality, really.

So, I love the Internet... I've been recommuning with this album tonight and just found this blog where like-minded folks are rhapsodizing about this excellent but unsung group. Thanks for the thoughts here, y'all!

Jerome said…
For the record Souljah Boy dis put out a smoking r&b song it was called "Turn My Swag On"
6:26 PM