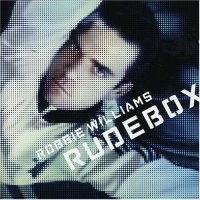 Talk about contrast. Robbie Williams' previous effort, 2005's Intensive Care, was the most focused of his career. Now we have Rudebox, which is easily the most all-over-the-map album he's made.

I should be in no way surprised. Williams has proven himself an adept musical chameleon over the years. There was the Eltonesque balladry of Angels, the faux-hip-hop of Kids, the 50s crooning of Swing When You're Winning, the cock rock of Cursed, the Bowie posing of Radio, the ska experiment of Tripping, and so on. The difference with Rudebox is that all of those styles and more are compressed into a single album.

The record features 5 unexpected covers, along with 11 original collaborations with various electro-pop producers/composers. On the surface it seems like a completely overindulgent project, but if you take each song individually, it's clear that Williams' gift for pop magic is fully intact.

More than anything, this is a dance record. It starts with the early '80s hip hop of the title track. Over a Casio keyboard run courtesy of composing team Soul Mekanik, Robbie "raps" ridiculous lines like, "old school 'cause it's the best, TJ Maxx costs less, Jackson looks a mess."
Lovelight is a 2003 disco pop composition by Lewis Taylor. It sounds like it was written specifically for Williams. More unexpected but just as successful is Bongo Bong / Je Ne T'Aime Plus, a 1998 release by French Latin folk singer Manu Chao. And the dance floor fillers Kiss Me and Never Touch That Switch will get you up up and movin',

Elsewhere Robbie stretches, if only somewhat. Viva Life On Mars is nearly a country hoe-down. She's Madonna is the first of two collaborations with The Pet Shop Boys. Let's see, teaming up with electro-pop's preeminent gay statesmen to make a song about Madonna? Robbie's not really working too hard to dispel those "he's a puff" rumors, is he? Their other collaboration is a fitting cover of the My Robot Friend love song/tribute We're The Pet Shop Boys. And The Actor is a scathing cut-down that should make anyone in the title profession reconsider his or her motivations and any notion of self-seriousness. As Robbie states in the breakdown at the end "In the future, everyone will be anonymous for 15 minutes."

Of course indulgence has its drawbacks. Keep On, Good Doctor and Burslem Normals have high spirits but no lyrical or musical draws. And the overlong nature of the album inevitable discourages it as a complete listening experience.

But among all of the left-field highlights and failed experiments, the album drops two tunes that might be the most intriguing of Robbie's entire career. The '80s and The '90s are baldly autobiographical story songs, spills of lyrics offered up in a delivery halfway between Dylan and The Streets.

The former concerns Robbie's youth, troubles in school, experiments with sex, death in his family, abortion, drugs, fashion and, of course, music. Williams cleverly weaves in references to Beastie Boys, R.E.M., A Flock Of Seagulls, Wham! and Berlin. The latter focuses on Robbie's time in the boy band Take That, from the fist blush of stardom to the heights of success, from his troubles with his bandmates to his decision to leave the group.

The songs are illuminating and double-handedly take Rudebox from "pleasant throwaway" status in Robbie Williams ouevre to vital for anyone who ever enjoyed his work. There are certain artists who can get away with indulgence by sheer force of personality and melodic talent. We don't know who they are until they test us and themselves. Well, Robbie, you passed.

Grade: B
Fave Song: The '80s
Fave Line: "Dance like you just won at the Special Olympics" (from Rudebox)