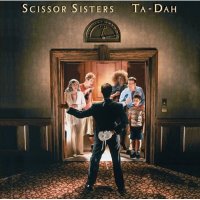 Sorry, that's kind of a broad question. I'm specifically referring to the fact that our pop music consumption is seriously low on fun.

I've written before about how we've unjustly turned away poor Robbie Williams. Kylie Minogue only gets American love once every 15 years, it seems. And then there are the Scissor Sisters, who, while being mostly ignored here in their own homeland, have become stars in the U.K.

Now the British charts can be a wacky place, so success there is not necessarily a banner of quality. But Scissor Sisters are far from a novelty act. Okay, so they use stage names and they dress like the Village People after a long hard night. And their lyrics, while funny and self-aware, are far from deep. None of that matters, because the band is deadly serious about creating perfect pop music, and they succeed more often than not.

The opener from their new album, I Don't Feel Like Dancin', could well become their signature song. It lifts the piano hook from December 1963 (Oh What A Night), as well as vocal tics from Andy Gibb, Elton John and George Michael and still manages to kick ass. The narrator may feel like sitting still, but the song will not allow the listener the same luxury.

Other early highlights include the gender-bending She's My Man and Lights, which is basically NC-17-rated Bee Gees. Land Of A Thousand Words is a big ballad that comes off as a little silly, if only because 1,000 words just won't get you as far as they used to. Even so, there's some nice slide guitar that recalls no less than George Harrison.

The album lags a tiny bit on the '30s styled Intermission and the Ana Matronic showcase Kiss You Off, but like a championship basketball team, but the band puts together a flawless second half.

Ooh and Paul McCartney belong on any Saturday night DJ playlist. The Other Side goes for gravity and achieves it, ruminating on mortality and devotion. Might Tell You Tonight is a sweet tune about monogamy that seems to me to hinge on that indecisive word "might" in the title. And Everybody Wants The Same thing is a peace/love/tolerance message that should never go out of style (and speaking of style, Robbie Williams might want to ask for his back after hearing this tune).

Grade: B
Fave Song: Paul McCartney
Fave Line: "Oh I could throw you in a lake or feed you poison birthday cake / I won't deny I'm gonna miss you when you're gone" (from I Can't Decide)

Jason said…
Am I insane or is this album heavily influenced by Paul Williams? I hear him all over this thing but haven't seen him mentioned in any review or by the band in interviews. I think it's especially evident on the track "I Can't Decide". Is it just not cool to admit that the guy who wrote "Rainbow Connection" is an influence?
3:56 PM