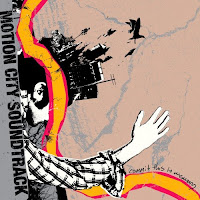 Is emo over? Did someone forget to notify me? I only ask because I swear the other day I read the words "post-emo" somewhere. I thought we were still in the midst of it. Aren't bands like Fall Out Boy, Taking Back Sunday, and My Chemical Romance still making waves? Isn't the Warped Tour still making the rounds?! Then again, Promise Ring, Blink-182, and The Get-Up Kids have all called it quits.

Ultimately, I guess it doesn't matter. Emo is probably the first pop music movement that no actual band would admit to being a part of. And that's a shame, because it's a good, non-trendy sound: harmony, keyboards, fast guitars, emotional lyrics. In fact those exact same words could be used to describe power pop, or the new new wave movement.

You could also use it to describe Motion City Soundtrack. And no matter what category you want to place it in, their second album is a corker!

Produced by Blink-182 singer/bassist Mark Hoppus, Commit This To Memory finds the middle ground that made Blink sometimes great; not too funny but not too serious. There are no scatalogical jokes and no experimental gothic punk, just great melodies about fucked-up relationships. Nothing captures that spirit than the third track, When "You're" Around. "I'm so full of love it deeply sickens me" singer Justin Pierre tells us. Isn't that the exact problem all of these emo kids have?

The album encapsulates the emo experience in other ways. Feel Like Rain bends Pierre's voice into a longing reminiscent of Jimmy Eat World. Hangman brings to mind the keyboard-driven whine of The Get-Up Kids. Producer Hoppus offers vocals to that track, as well as a Blink-182-esque drum and guitar breakdown at the end of Time Turned Fragile. But it's not all-emo-all-the-time. Resolution and L.G. FUAD both bring up fond allusions to underappreicated '80s outfut The Outfield.

Also, you know me, I can't go without mentioning the fact that MCS are from Minneapolis. If you didn't know that there are a couple of clues, one overt and one covert. The less direct reference is this great line from Time Turned Fragile: "How it got so cold / That words just froze / We had to wait 'til summer / To find out what was said." That's a Minnesota thing, for sure. Better Open The Door is not only the most raucous song on the album, but it also contains three Minneapolis references. "Frank fails to see the humor in / my sad attempts at break dancing / In every bar along Lyndale Avenue" and "Liz likes to liquor up my thoughts / From the C.C. Club to the Triple Rock."

A gift for melody and songwriting is in abundant evidence on Commit This To Memory, from the two (TWO!) choruses on Better Open The Door to the float-away-on-a-cloud bridge on Make Out Kids that could have been its own song. MCS are obviously a band reaching for their prime. If there really are those who believe that we are in post-emo era, this is the kind of album that proves the rumors of its demise have been grossly exaggereated